“The Kump House is located a fourth of a mile off the Cold Stream Road. The land is part of a huge land grant once owned by Lord Fairfax. He sold the property to Mr. Biget, who sold it to Mr. Moreland. Later Frederick Kump ended up with the land.

The house was built in 1808. The house did not have a kitchen. The wife said, “I want a kitchen.” Her husband, Frederick Kump, took the barn back,moved it, and hooked it on to the house.

William Frederick Kump was the son of Frederick Kump. According to the October 8, 1850 census he was born in 1848. In 1848 William decided to join the union army. His father was probably a southern sympathizer. One story tells that the father was very upset and begged the son not to go. The story has it that Frederick followed William out of North River Mills pleading with him not to go. William kept going to aw Paw, West Virginia or Cumberland, Maryland to enlist. On February 23, 1864, to get into the army, William lied about his age. He apparently said he was 18 when he was two years younger. He was killed in action six months later at Hallowtown, Virginia.

When William joined the army someone wrote his name William S. instead of William F. Kump. William apparently was illiterate since he only signed with an “X”. Nine years after his death the assistant adjutant general figured out William’s correct name.”

WARDENSVILLE – There are two precious gifts parents can give to their
children.
One is roots so they have a strong foundation and know where they’ve come from.    The second is wings of the confidence in themselves to move forward.    Take either of those away and there’s a need to know where you’re from to see where you’re going.
For one Wardensville woman, raised by her maternal grandparents, there was always the question of where her roots began?    After seeing the Kump name in the Hebron Cemetery, in Intermont, Va., Barbara Hahn’s mother questioned who her maternal grandmother was,
sparking curiosity in Hahn, who also wanted to know her ancestry.
“My mother was a Dunlap and my father was a Kump.  Along with that I knew my ancestors came over on the ship Samuel form London in 1733,” Hahn recalled.
Gathered from records of foreigners’ arrivals, officials did their best to write down the correct names.  Record-keeping was archaic at best and the following practice took place as newcomers came ashore.
As one official read the names out as best he could (pronunciation was difficult with some of the European names) as the shipload of foreigners left their ship, a second official, as the new comers moved through records, was doing his best to write down the names as they were
sounded, according to author Grace Kelso Garner in her book ‘Earliest Settlers, Western Frederick-Eastern-Hampshire counties in Virginia and Their Descendants.’
The ship Samuel carried foreigners from Germany and Holland, and although most of the foreigners were well educated and could write, they did so in their native language, which was of little use to officials recording their entrance into the Americas.
Variations of the (Kumpff) Kump name – Kamp, Camp, Comp – were entered into records, making searching a family tree a more complex task,
For Hahn, her search reached back only so far and then stopped until someone in Winchester, Va., told her they believed Winchester resident Nancy Lewis’ mother was a Kump.
And as Hahn would soon learn, Lewis said her mother’s last wish was to get the family Bible back into Kump hands.
Hahn nearly missed the opportunity to get back her family’s bible.
“I almost didn’t call and then when I was in Winchester because there was a thunderstorm so I didn’t want to go out, but Nancy said ‘come right now,’ so I went to pick the family Bible,” said Hahn.
And Hahn is glad she did.    The first entry in the Kump Bible was Frederick Kump, born Aug. 26, 1798.
“He would be my great-great-great-grandfather,” calculated Hahn.
According to the Hampshire county 1850 census, Frederick Kump’s occupation was listed as a blacksmith.
Hahn’s family line was finally falling into place until she looked at the family record of marriages listed in the Bible.
“Frederick was listed as having three wives,” she said.
“He married Elizabeth in 1823, Dorinda in 1835 and Juliana Ears in 1845.”
Hahn admits she was confused for a while until she red the death entries in the Kump Bible.
Frederick’s first wife, Elizabeth, died at the age of 32 in 1834.
He married his second wife, Dorinda, a year after Elizabeth’s death.  She died in 1836.
And it was Juliana who was Hahn’s third removed great-grandmother.
As Hahn continued her research, she discovered that Frederick and Juliana’s second son William fought in the Revolutionary War, joining when he was just 16 years old.
“He must have told them he was 18 and I think his father (Frederick) cried when William went away because he went to fight for the North,” Hahn explained.
William Kump was killed a year later at Hall town, Va.
Hahn’s latest family discovery was last month when she visited the Old Mills River Cemetery.
The cemetery, located about a quarter mile opposite the Old [North] Mills River Inn, had a grave marker with Juliana Ears Kump’s name and Hattie Kump, her youngest daughter.
“I’d like to get a stone for Hattie’s grave.  I believe she may have been the one keeping the family Bible up to date,” said Hahn.
Hahn found other names, not necessarily form his ancestors, in the cemetery that she believes may have been killed in the war.
“The names Wells and Short are on markers.  Maybe Short Mountain is named after the Short in the cemetery?” she questioned.  [Apparently the Mountain was considered short in height or length.]
Now that Barbara has traced her family back three generations, she wants to find a good home for the Kump Family bible.
“I want to preserve the history of the Bible so I’m looking at libraries in the area,”  Hahn remarked.
“The Handley Library in Winchester, Va., might be a good choice, she added.
Hahn says there’s also a monument in honor of Henry Kump, a Revolutionary War hero, residing at Yellow Spring.
For now, Hahn is content knowing most of her family ancestry, but she’s still curious to know how Frederick came to North River Mills.
Until she finds that answer and with the discovery of her great-great-great-grandfather, Frederick, the center of the Kump family, she wonders if it means anything that her husband is also named Frederick.
In researching you family ancestry, look to family Bibles for birth, death and marriage dates records to help you find your ancestors.    Often, those are the only records.” 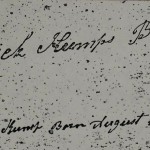 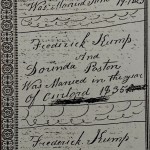 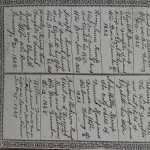 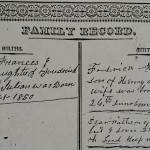 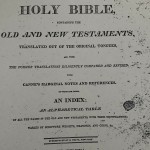 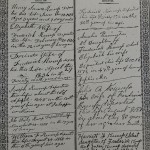