The Hampshire Review has allowed me to blog about eating insects and  entomophagical (isn’t that a cool word?) dishes and products here: Ento Treats

Here is a listing of events around the world.
If you would like to help host an event– we can talk.
I listed some of my past bug events at the bottom of this page.

eatbugsevents.com has a good list of bug product companies.

The Bug Project So. CA non-profit

Should we eat bugs? – Emma Bryce

Why You Should Eat Bugs

The Future Of Food And Eating Insects With Aly Moore

How To Raise your own crickets:

Can Eating Insects Save the World BBC

Washington Post, Tamar Haspel, Oct.2017, Eating bugs can help the environment. So how do we get past the ick factor?

fao.org Insects for food and feed

How Food Makers Are Convincing America to Eat Bugs

Bringing Bug Eating Into the Mainstream

Could cricket flour bring bug eating to the mainstream?

Mississippi State:Insects: Coming soon to a dinner table near you

I Farm Crickets, The Future Of Human Food: 7 Insane Truths

Cicadas to emerge this spring in multiple West Virginia counties

How to Cook Cicadas, According to 3 Richmond, Va., Chefs 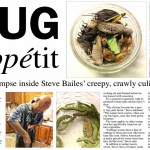 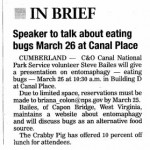 (3 images above are from a Nov. 2015 Hampshire Review article by Ed DeWitt.) This page has information about why we should eat  bugs and where to get them. I am hoping the West will consider bugs as a possible earth friendly solution to the rapidly rising numbers of people needing nutritious food.  They are amazingly efficient, using vastly less land, water and other resources.  They are rich in protein and many important minerals. And they taste good.

May, 2019 , International Culture Fiesta, Augusta, WV (Facebook event page).  I presented “Bugs for Dinner– Around the World,” and served various insects-as-food dishes.  Here is the blog.

In December 2018 the Hampshire Review featured my bug show at Romney Elementary.  Here is the blog.

I served different dishes made with insect products. Steve has been a guest presenter at various venues,  but this was my first public venture into pairings with alcohol– a natural match don’t you think? 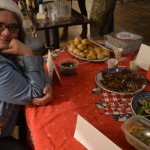 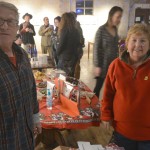 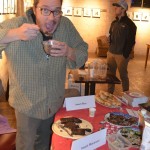 You see the Facebook event page here and a TownPlanner page.  Check out the photos here. 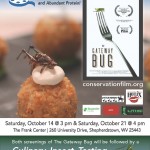 asked me to share/serve some buggy food after a screening of the movie, “The Gateway Bug.” (Click here to see the trailer.

Hilary wrote: “Attention Foodies! Insect protein is trending in the US. Come learn about it at the American Conservation Film Festival. We’ll have products for tasting available after the screenings of The Gateway Bug. Join us 3PM Sat., Oct.14 at the Frank Center AND Saturday, October 21st at 4PM at the Frank Center. ( information about buying tickets. and more info about the screening.)

In March 2018 I was the guest chef on this podcast with Entonation.

My friend and college room mate sent me this write up about the  September Brooklyn Bugs Festival. 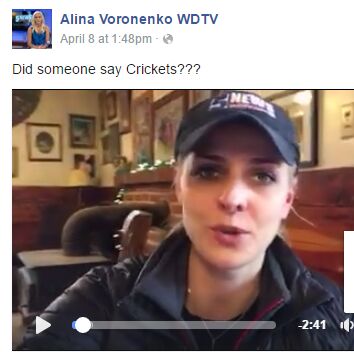 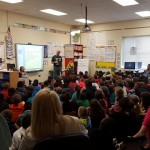 I got to return to John J. Cornwell Elementary (my 1st teaching assignment in 1972) to share my bug passion in Feb. 1917.

$513.00 was raised for the Food Pantry at the Bug Banquet, in Feb. 2017 at the Capon Bridge Community Center.  You can find photos and more here.

In Jan. 2017, Over 150 students grades 3-5 and staff of Romney Elementary  gave ear to the many benefits of entomophagy.   5th grade teacher, Carrie wrote: “Thank you Steve Bailes for coming to our school today

and educating [us] on the benefits of eating bugs!!!!!  I think you convinced Jess Barger to have bug snacks once a week!!!!!  Marleigh [Carrie’s pup] was thrilled with her Crisket [Hopn Bakery treat] !!!”  Click here for the blog  or here for Jess Barger’s Photos on Facebook .

Culinary Insects with Entomophagist Steve Bailes.  Lindsay Brill invited me to discuss entomophagy  in Sept., 2016 at the Purcellville, VA   library.

In May 2016, I gave a presentation to the Augusta Trailblazers 4H.  Read more here.

“The 1st conference dedicated solely to edible insects to be held in the U.S.” Eating Insects Detroit, Wayne University, was in May 2016, in Detroit,

In 2015, Steve got to share entomophagy with the 5th graders at Slanesville Elementary.

In March 2016 Steve gave a presentation for the The National Park Service: Entomophagy – Why We Should Eat Bugs! I addressed questions such as, Should we consider an alternative food source? And if so, why? Would we eat insects if we thought we would live longer? Would we eat them if we thought the Earth could dramatically benefit. How do world leaders such as Kofi Annan, the 7th Secretary-General of the UN, weigh in on entomophagy (eating insects)? Can Americans ever over come the “ick factor”?   Bugsfeed.com listed the event.  The Chesapeake & Ohio Canal National Historical Park  also published this.  Photos are posted here. 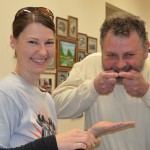 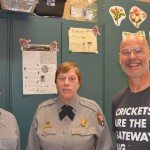 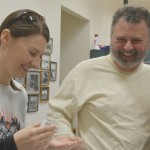 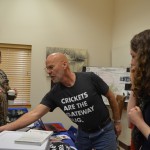 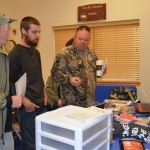 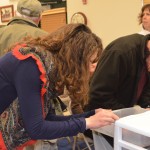 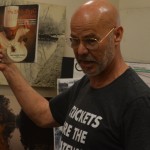 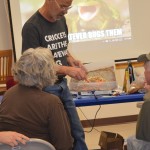 In In April 2016 I visited W. M. Irving Elementary to promote entomophagy.  Click here for the blog and photos.

In May 2016, I spoke to The Augusta Trailblazers 4H.  I think you can see Cindy Twigg’s photos here .  Or check out the blog here.