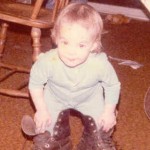 Jan. 27, 1978, Terry Lynn and I found out (we’re so old, it was the rabbit test) Heather was on the way. It was bitter cold– below zero. I slid backwards from the hill above Kniplings shale pit, back towards North River Mills, to the power line at the bottom of the hill. There I mindlessly took the keys, and walked over a mile to our house. But then I was so excited I stopped in to tell Mom and Dad. Lots of hugs and back slapping. Mom suggested I call Terry Lynn’s mom and share the news. After excited congratulations Doris asked to speak to Terry Lynn. “Terry Lynn! Oh gee! (possibly other expletives) I dropped the phone and took off to see if my wife and unborn child were still alive.

Carrie Clark is swimming with snakes. That reminds me of Terry Lynn happily (and unwittingly) swimming with eels on island. The first time we were checking out the Willis (I think) waterfall in Leone (American Samoa). I’m pretty sure I told Terry Lynn how the eels liked the fresh water pools, and I didn’t get in. Terry Lynn (who didn’t hear my warning) was happily swimming– but she was wondering why objects were bumping into her. You should have seen her exit that pool when she realized what they were!
The next time, we were with Johnathan McMillin (a Pacific Horizons School Alumni). Terry Lynn was again in the pool as Johnathan told the story of the Tongan who becomes an eel who then becomes the first coconut. Terry Lynn was amazed by Johnathan’s story telling ability. It was almost like she could feel the eel slithering around her thigh– (uh… because… THERE WAS AN EEL SLITHERING AROUND HER THIGH! That woman can really move when she wants to.