Pastor Teresa Adams is leading worship each Sunday except 5th Sundays when the worship service is 10 AM and rotates among the churches on the charge. 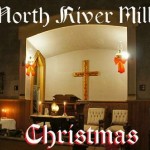 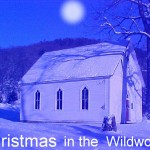 The North River Mills United Methodist Church, the second oldest church on the charge, was built in 1889 on land given by William Miller. It is located between the Granville Moreland house and the old school house.
The North River Mills Church was not the first Methodist Church in the area. A church was built at the top of Grape Ridge. William Miller felt the North River Mills area also needed a church, and so he gave the land and soon the North River Mills Methodist Episcopal Church was built. The word Episcopal was later dropped and, in the 1960’s the word United was added.
Inside there is a balcony that was used by the Blacks (although there may have been only one Negro family in the church.) The Methodist church was very progressive and was one of the first churches to allow blacks and whites to worship together. Most other denominations made blacks stand outside and listen to the services from there.
The ceiling is stenciled in black paint and the top of the walls are stenciled in
red. The patterns are considered simple. The leaves look like they may be fingerprints. It is felt the congregation did the work themselves. Pastor Deborah McKown invited an expert on historic art to look at the stenciling. The expert said the stenciling was made from thumbprints which followed a pattern. She also said it would be easy to copy. (The congregation has considered restoring the church.)
There are lantern lights in the center of the church. These were used full time until Rev. Nelson added electric to the church in 1981. Today they are used only for special services like the Christmas and Easter programs.
The old pump organ in the church is the second organ for the church. This was given by Goldie Moreland. This organ is still used for services today. Miss Heather Bailes is the organist.
The church used to have church picnics during the summer. Some of the men would go up to Ice Mountain and get enough ice to make ice cream and lemon-aid. Mrs. Lake Henderson remembers doing this as a small child.
The church has always had problems with bees in the walls. While Rev. Groscup was serving the church (1920-1924) he would take a piece of wood siding out and get the honey and then put the siding back like it was.
When the church was built, North River Mills was a busy town with nearly two hundred people living and working there. Today, it is a very quiet town with just a handful of people. The church has kept its doors open all the time. The church means a great deal to the people of North River Mills. The church is still operating with service every second and fourth Sundays of every month.

Heather Rogers has been a blessing.  She became a Certified Lay Minister and led worship services at North River Mills and Capon Chapel.  She has now been called to serve churches on the Mathias Charge.

Christinkling
Christinkling is like Christmas caroling, but you try not to let anyone know
who you are. The youth of the church would go around to different houses in
the community and sing.
John Witacre said he bought a pair of new boots three or four times his
actual shoe size just so no one would recognize him. He hid the in a barn so
no one would find them. Also part of his costume was a sheet. One time
someone chased him. John punched the chaser to avoid being identified. 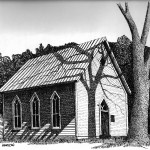 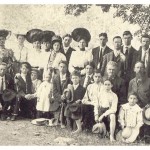 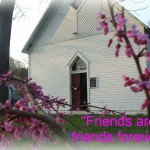 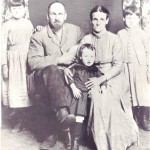 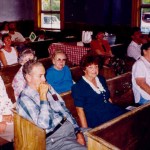 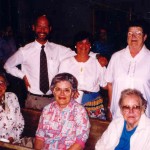 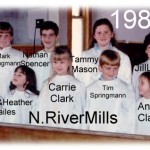 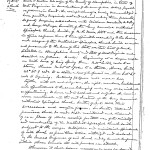 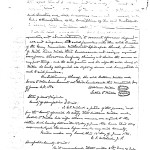